“Hal Sirowitz is the bard of the deadpan delivery. His poems are like a mad combination of the haiku and the Borscht Belt—they make me laugh and smile with happiness at the pain of being alive.” —Jonathan Ames, creator of HBO series “Bored to Death” 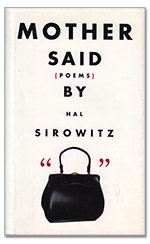 Don’t stick your arm out the window,
Mother said. Another car can sneak up
behind us, & chop it off. Then your father
will have to stop, stick the severed piece
in the trunk, & drive you to the hospital.
It’s not like the parts of your telescope that
snap back on. A doctor will have to sew it.
You won’t be able to wear short sleeves.
You won’t want anyone to see the stitches.

Don’t eat any more food in your room,
Mother said. You’ll get more bugs.
They depend on people like you.
Otherwise, they would starve.
But who do you want to make happy,
your mother or a bunch of ants?
What have they done for you?
Nothing. They have no feelings.
They’ll eat your candy. Yet
you treat them better than you treat me.
You keep feeding them.
But you never offer me anything.

Don’t swing the umbrella in the store,
Mother said. There are all these glass jars
of spaghetti sauce above your head
that can fall on you, & you can die.
Then you won’t be able to go to tonight’s party,
or go to the bowling alley tomorrow.
And instead of celebrating your birthday
with soda & cake, we’ll have
anniversaries of your death with tea
& crackers. And your father and i won’t
be able to eat spaghetti anymore, because
the marinara sauce will remind us of you.

From My Therapist Said 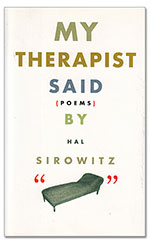 Buy on Amazon or IndieBound.

You’re both trying to achieve closure
in this relationship, my therapist said.
You want to marry her. She wants
to break up with you. And I think
she’s going to prevail, because
it’s a lot easier for her to break up
with you than it is for you
to marry her. You’ll have to buy her
a ring, go for a blood test, & get
both families involved. All she has
to do is not see you again. And
it seems like she has already started doing that.

You have this need to be famous,
my therapist said, but I think
you should get a job first. If
you look at all the famous people,
they all had jobs. George Bush
never looks like he’s doing anything,
but he was once a President. You have
to start from somewhere. Otherwise
you’ll be famous inside
your own head, but so is everyone else.

You’re always giving, my therapist said.
You have to learn how to take. Whenever
you meet a woman, the first thing you do
is lend her your books. You think she’ll
have to see you again in order to return them.
But what happens is, she doesn’t have the time
to read them, & she’s afraid if she sees you again
you’ll expect her to talk about them, & will
want to lend her even more. So she
cancels the date. You end up losing
a lot of books. You should borrow hers.

I Finally Managed to Speak to Her

She was sitting across from me
on the bus. I said, “The trees
look so much greener in this part
of the country. In New York City
everything looks so drab.” She said,
“It looks the same to me. Show me
a tree that’s different.” “That one,”
I said. “Which one?” she said.
“It’s too late,” I said; “we already
passed it.” “When you find another one,”
she said, “let me know.” And then
she went back to reading her book.

From Before, During and After

Down by the Sea 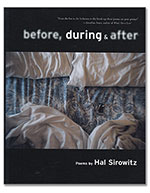 When I was young I thought the condoms
I found on the beach, she said, were
dead jellyfish. When I brought them home
my mother took one look at them
& threw them out. I wasn’t allowed
to go to the ocean by myself anymore.
She was afraid of what it could show me.

Taking the Sex Out

I’d stay inside my room & play
the Rolling Stones’ “I Can’t Get
No Satisfaction” to help me deal
with my sexual frustrations. Mother
would stick her head inside the room
& say satisfaction can also be attained
by helping her clean the house. She
kept trying to take the sex out of rock & roll.
I kept trying to put it back in. When
I went out with Jane I brought the longest song
I had, “Inna Gadda Da Vida,” so we wouldn’t
have to stop making out to change the record.
She said the music wasn’t putting her in the mood
for sex, just for drugs. We went outside,
so she could score. She didn’t invite me back in.

Back on the Farm

I grew up on a farm, she said.
I used to get up early to milk the cows.
When you squeeze my breasts
you remind me of that time.
But instead of it being a pleasant memory
you make me feel like I’m the cow.

The Two Ends of a Cat 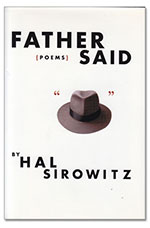 Your sister says she loves the cat,
Father said, but it’s your mother
who cleans her bowl & changes
her kitty litter. She does the dirty work.
Your sister does the enjoyable jobs- she
feeds & brushes her. She only deals with
the front of the cat & leaves the back half
for your mother. But a cat has both a front
& a back. By right she should be taking turns & not
leave your mother in charge of the most difficult part.

The Absence of Light

God works in mysterious ways, Father said.
But he’s not half as mysterious as your mother.
He said, Let there be light. And there was light.
I don’t see anything mysterious about that.
He did what He said He’d do.
Your mother says, Let’s not be late for the movie.
Yet she takes so long getting dressed
that it doesn’t pay to go. Then she
gets mad that I don’t take her any place.
God created light where there was only darkness.
She only creates confusion.

The Pursuit of Laziness

It seems like the only thing you learned
at college was how to be lazy, Father said.
We didn’t feel the need to teach that at home.
If you had studied American history you’d
have noticed that our founding fathers
made no mention of it in the Bill of Rights.
Nowhere is it written that one has the right
to be lazy. Since you’re a citizen of this country,
I’m not going to allow you to be lazy in my house.
If you don’t like that rule you’re free to swim
a few miles off shore where the laws
of our government don’t apply. But
I doubt if you’ll be able to be lazy out there.
You’d have to spend all your time just staying afloat.

“Why should I test
your mother’s love,”
Father said, “by seeing
if she’d follow me
to the end of the earth,
when I know I’d end up
being the one carrying her luggage?”

A Step Above Cows

I read somewhere that a cow
can only walk up stairs but
not down. Even though I have
Parkinson’s, I’m a step ahead
of a cow. I can walk up or down
without much trouble. And the
one time I fell, I was walking up
but lost my balance and fell down,
which proves that I’m not
a cow, because for a split second,
I had the choice of where to fall—
up or down—and unceremoniously
took the down route, because it
takes you faster to where you
want to go—at the beginning
of the stairs, so I could do it right this time.