“Writing is a great experience. I get into this role and I just go with it…I get up early in the morning and I just start writing, and I have no idea of whether it’s good enough. I just go forward.” 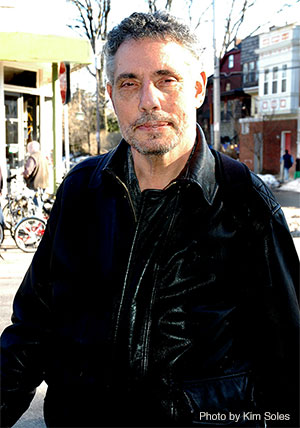 Hal Sirowitz is an internationally known poet and the author of five books of poetry: Mother Said (Crown/Random House 1996); My Therapist Said (Crown/Random House 1998); Before, During & After (Soft Skull Press 2003); Father Said (Soft Skull Press 2004); and Stray Cat Blues (Backwaters Press 2012) which was awarded the 2013 Nebraska Book Award for Poetry. His work has been translated into thirteen languages including Icelandic, Turkish, Portuguese, Japanese, and Macedonian. Sirowitz first began to attract attention at the Nuyorican Poets Café where he was a frequent competitor in their Friday night poetry Slam in the late 1980’s and early 1990’s . He was on the 1993 Nuyorican Poetry Slam Team which competed in that year’s National Poetry Slam in San Francisco. Mostly he is known for Mother Said, which sold out after the first printing. He is known as “the people’s poet.” The writer Liz Rosenberg credits Sirowitz for “democratizing” poetry.

Hal has performed his poetry across the country and Europe, but he is especially known in Scandinavia where he is the most popular translated poet in the history of Norway. (He says Norwegians must have mother problems too.) Animated films and a play based on his poetry have also been adapted in Norway. In 2007, he was a participant in the Jerusalem Conference of Writers and Poets where he read with Claude Lanzman, the creator of the documentary “Shoah.” He has performed and appeared on MTV’s Spoken Word Unplugged; Lollapalooza; Edinburgh’s Fringe Festival; the Helsinki International Poetry Festival; the International Children’s Book Festival in Iceland; Studio Zed on Canadian Public Television; the Saint Mark’s Church New Year’s Day Poetry Marathon; PBS’s Poetry Heaven; NPR’s All Things Considered; PBS’s The United States of Poetry and Fresh Air with Terry Gross. Garrison Keillor has read his poetry on NPR’s The Writer’s Almanac, and an interview with him is featured on the show’s website.

Hal was awarded a National Endowment for the Arts Fellowship in 1994 and a New York Foundation for the Arts fellowship in 2004. In 2000, Hal became the second Poet Laureate of Queens, New York, a position he held for three years. In 2012, he was the co-winner of the Noir Con Poetry Contest judged by Robert Polito.

Composers have chosen Hal’s poems as an inspiration for music they have written. Alla Borzova put some of Hal’s poems from Mother Said to music which was performed at Lincoln Center and the Aspen Music Festival and was awarded the Frederick Delius Award. The composer David Edelman wrote music based on Hal’s poetry which was performed at Symphony Space, and David del Tredici has written a song based on one of Hal’s poems. John Linnell of They Might be Giants attributes their song “Palindrome” to hearing Hal read about his mother.

Hal’s work has been included in many collections and anthologies such as: Garrison Keillor’s Good Poems and Good Poems for Hard Times; Aloud: Voices from the Nuyorican Poets Café (edited by Miguel Algarín and Bob Holman); 110 Stories: New York Writes After September 11 (edited by Ulrich Baer); Thus Spake the Corpse: An Exquisite Corpse Reader (Volume I, Poetry and Essays) (edited by Andrei Codrescu); Word of Mouth: Poems Featured on NPR’s All Things Considered (edited by Catherine Bowman); Lost and Found: Stories from New York (edited by Thomas Beller); The United States of Poetry (edited by Joshua Blum and Bob Holman); Beauty is a Verb: the New Poetry of Disability (edited by Jennifer  Bartlett, Sheila Black, and Michael Northen); The Posen Library of Jewish Culture and Civilization (edited by Deborah Dash Moore and Nurith Gertz); Jews: A People’s History of the Lower East Side (edited by Clayton Patterson); Up is Up But So is Down (edited by Brandon Stosuy); The KGB Bar Book of Poems (edited by David Lehman and Star Black); Broken Land: Poems of Brooklyn (edited by Julia Kasdorf and Michael Tyrell); The Best of the Bellevue Review (edited by Danielle Ofri); The Bloomsbury Anthology of Contemporary Jewish American Poetry (edited by Deborah Ager and M. E. Silverman); Signs of Life: Channelsurfing through 90’s Culture (edited by Jennifer Joseph and Lisa Taplin); New America: Contemporary Literature for a Changing Society (edited by Holly Messitt and James Tolan); Poetry Nation: North American Anthology of Fusion Poetry (edited by Cabico and Swift); and Poetry Slam: The Competitive Art of Performance (edited by Gary Glazner).

Hal is a retired New York City public school teacher. He lives with his wife, the writer Minter Krotzer, in Philadelphia.